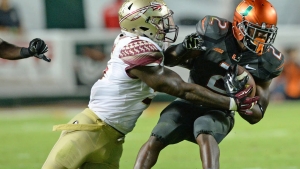 The Florida State Seminoles proved that they are the #1 team in the nation by beating the Miami Hurricanes. Were the Canes a top team in the nation? "No", but this is the thing -- all of the other so called better teams with blemished records all could not handle adversity.

Mississippi the current #1 lost to Alabama today who has a loss.

Alabama lost to Ole Miss who has proven to be a fraud.

TCU really, come on they're just getting to the point where they can shop in the mens section, oh and they have a loss.

Oregon, year after year they prove they can run up the score until it's time to play with the big boys and they have a loss to an unranked Arizona team. What excuse can ESPN make for them, Oh the have Phil Knight NIKE marketing dollars.

The only thing that anyone can say about the Seminoles is they are not as dominant as last year -- and my answer to that is "You don't get this years Trophy for what you did last year."

This gets even better -- the quarterback, the trouble maker guy, the one with no character, the guy that no team should draft -- Jameis Winston is the best quarterback in the nation, will be the #1 pick in the draft as he is a top 15 quarterback in the NFL today if he were to suit up tomorrow.

Don't be surprised if Jameis Winston is accused of 5 more allegations tomorrow (click the link here they go)as it seems all the talking heads with the squeeky clean closets will come up with reasons why Mr. Winston should not be praised for his Balls of Steel.

Clemson Freshman quarterback Deshaun Watson injures his knee on a run where he was not hit. It's believed that Watson has a torn ACL, if so he will miss the remainder of the season. See Video below. Clemson Tigers hold on to beat the Boston College Eagles 17-13.

The Tigers started senior quarterback Cole Stoudt after freshman sensation Deshaun Watson broke his hand in last weeks game. Stoudy was not impressive by any means,but did what it took to win. He completed 29 of 45 passes for 285 yards, and the Tigers (5-2, 4-1 ACC) got help from a missed BC extra point.

The Eagles (4-3, 1-2) moved to the Clemson 29, converted a fourth-and-1 and then Tyler Murphy found an open receiver streaking for the end zone. But Tyler Rouse couldn't hold onto the ball, and Clemson took over on downs and ran out the clock. Is Rashad Greene the best receiver in Florida State History?

He passed Ron Sellers for the most receptions in Florida State history this past Saturday against Syracuse, which he ended the day with six receptions, giving him a total of 215 receptions for his career.

Greene is also in range to top Sellers on the the all-time receiving yards list which is 3598 if he remains healthy for the rest of the season.

The all-time touchdowns record of 31 held by Peter Warrick, is also within reach so he really needs to be nice to Jameis Winston.

Historical note: Of course, it should be noted that Sellers' records are from a time in which far fewer games were played each season, and stats from bowl games did not count. Sellers amassed his numbers in only 31 games. He was considerably more dominant than Greene and really any other FSU receiver on this list on a per-game basis. By contrast, the Syracuse contest was Greene's 43rd career game at Florida State. The great Peter Warrick did it in 43. Have you ever wondered what makes a good coach. What's the background that makes you extroidinary at coaching. Check out the Jimbo Fisher Story and explore where great coaches come from. 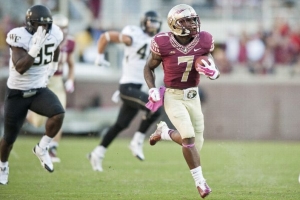 It’s October and the Wake Forest Deamon Deacons were not that scary as the Florida State Seminoles sprinted past them on the way to a 43-3 victory in Doak Campbell stadium.

All the talk has been about the Seminole defense no being of championship caliber this season, but as long as Florida State remains undefeated is all that matters.

Though Wake are not world beaters on offense the Seminole defense took care of business and were dominant as we expect them to be.

"Totally dominated the game," Florida State coach Jimbo Fisher said. "Defense got some turnovers, which we've been waiting on.

Winston threw for 297 yards with a touchdown and an interception while Aguayo kicked a career-high five field goals in a single game. The reigning Lou Groza Award winner also set a school record with 21 consecutive field goals.

"I didn't know (about the record) until after the game," Aguayo said. "I did think about it three weeks ago ... but I didn't think about it coming into this game." Clemson’s new American Idol Deshaun Watson had another big day as he threw for two touchdowns and rushed for two more as the Tigers dominated the North Carolina State Wolfpack in Death Valley.

In roughly three quarters work Watson followed up his school-record six TD passes against the UNC Tar Heels with a stellar 267 yards in the air and 67 on the ground leading the Clemson Tigers (3-2, 2-1 Atlantic Coast Conference) to a 41-0 victory over NC State.

Watson connected with talented wide receiver Mike Williams for 56 yard TD strike on the opening drive and found him again for a 31 yard touchdown pitch and catch in the first half. Clemson Tigers freshman quarterback Deshaun Watson ACC Player of the Week after leading the Tigers to a 50 - 35 win over the North Carolina Tar Heels in Death Valley on Saturday.

Clearly the Clemson offense seems to run smoothly with Watson under center and the young man is poised beyond his years. It's an awesome for Clemson fans that they have a guy who is going to put up these type of gaudy numbers over the next four years. It’s the beginning of a new era for Clemson football. Freshman Deshaun Watson entered the game last week against Florida State in Tallahassee like he belonged on that stage. There could have been no bigger setting to take the reigns, but Watson was poised in the heartbreaking loss to the Seminoles.

The Tigers return home, and Dabo Swinney’s squad could really use a shot in the arm -- with Watson as the starter this may be all the medicine Clemson needs.

Watson getting the start and it's his job to lose at this point. The Tigers welcome a lowly North Carolina Tarheels team that was blown out last week into Death Valley.