Clemson Breaks Out In 4th Quarter to Beat FSU 31-14 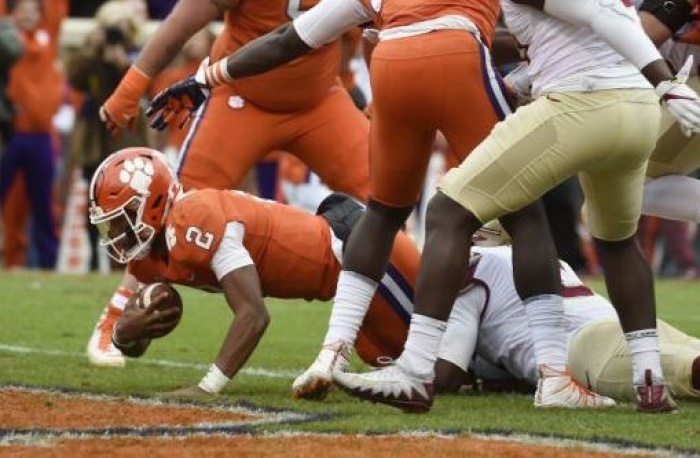 The Tigers broke away from the Noles in the 4th quarter to secure a 31-14 victory.

Travis Etienne rushed for 97 yards and two touchdowns, including a 1-yard burst with 3:05 left.

The Tigers (9-1, 7-1, No. 4 CFP) and their dominant defense looked to have this one wrapped up when they opened a 17-0 lead with two minutes left in the third quarter. But the Seminoles rallied on Jacques Patrick's 9-yard scoring run and a double flea-flicker for a 60-yard TD catch by tight end Ryan Izzo.

Florida State then recovered Kelly Bryant's fumble on the Clemson 40 with 6:46 to go, putting the Seminoles in position to spoil the Tigers' College Football Playoff hopes. But safety Van Smith intercepted James Blackman's pass over the middle on the next play, setting up the TD drive that secured the win for the defending national champions.

Etienne had a 25-yard run to the FSU 5 and took it in two plays later as the chilly Death Valley crowd erupted in celebration of a chance for a third straight ACC title in Charlotte in three weeks.

It's the fifth time in coach Dabo Swinney's nine full seasons that he has taken the Tigers to the conference title game. Clemson will face No. 7 Miami, which won the Coastal Division with Virginia's 38-17 loss to Louisville on Saturday.

For Florida State (3-6, 3-5), it marked its first losing ACC record since 2006. And the Seminoles' landmark streak of 35 straight bowl games is in jeopardy, too - they have three games left against Delaware State, rival Florida and Louisiana-Monroe.

Bryant finished with 151 yards passing. He also rushed for 60 yards and a touchdown. Adam Choice had a 10-yard TD run with 35 seconds left for Clemson's final score.

More in this category: « The Tigers Dominate the Cardinals 47 - 21 Should Trevor Lawrence Be The Starting Quarterback »
back to top
How to resolve AdBlock issue?
X