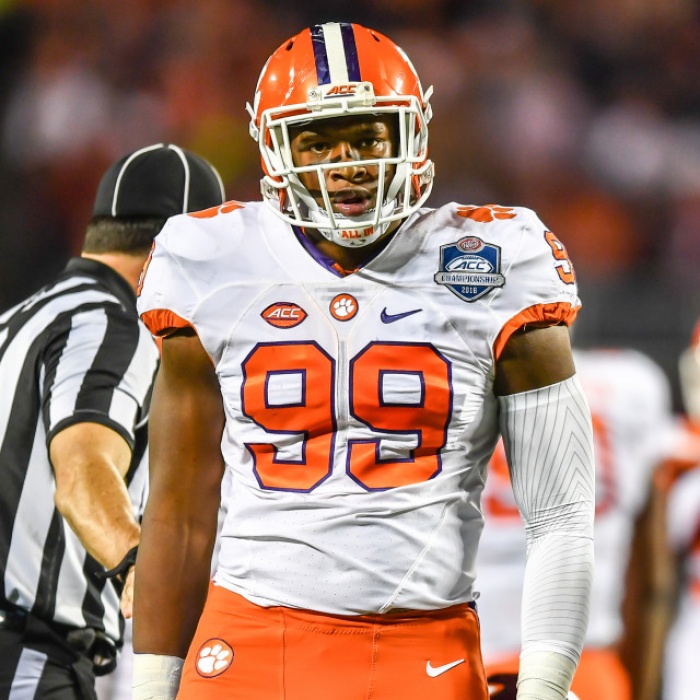 Clemson, S.C.—The defense held the upper hand during Clemson’s first preseason scrimmage at Memorial Stadium on Saturday. It was Clemson’s sixth consecutive day of practice in pads as the Tigers prepare for the season opener three weeks from Saturday against Kent State.

Clemson returns seven starters from last year’s National Championship team defense and is expected to have one of the best defensive units in the nation in 2017. The experience level combined with a common scrimmage rule that a one-handed tag of the quarterback results in a sack led contributed to the results on Saturday. The defense was credited with seven sacks and 14 total tackles for loss.

“We played well on both sides of the ball today, but the defense was more consistent,” said Head Coach Dabo Swinney. “We had a lot of defensive players contribute and it tells me we are going to be a deep team. They did have some penalties and mistakes at the end in goal line that we need to correct.”

Shaq Smith had five stops, including a sack and Isaiah Simmons had four tackles, a tackle for loss and three pass deflections. Chad Smith and Tre Lamar added five tackles from the linebacker position. Tanner Muse and Mark Fields had interceptions for the only two takeaways on the day. The offense did not have any fumbles.

“Overall we didn’t have the rhythm that we need to have on offense today. We need to be more consistent as a unit on offense. All four quarterbacks did some good things and all had some plays they would like to have back. We had three penalties on wide receivers and we need to correct that.

“But I was pleased with Kelly’s decision making. And that was good to see. He had to go against the No. 1 defense all day.”

Zerrick Cooper threw a one yard scoring pass to Diondre Overton, who had three catches for 33 yards and was complimented by Swinney after practice. Hunter Johnson threw a 23-yard touchdown to walk-on Carter Groomes. Tee Higgins caught a 38-yard pass from freshman Chase Brice. Cannon Smith led the tight ends with two receptions for 39 yards. Freshman running back Travis Etienne scored on a 32-yard run late in the scrimmage and was the top rusher with 10-56.

Backup kicker Alex Spence got some work on Saturday and made 4-4 field goals, including a 51-yarder. Greg Huegel made one from 51 yards as well. Swinney said Will Spiers held the upper hand among the punters today. He had punts of 52, 43 and 39 yards.

The Tigers will take a break from practice on Sunday, then return to the practice fields Monday afternoon. The team will have a half scrimmage on Wednesday and another scrimmage in Memorial Stadium next Saturday. All practices are closed to the public.