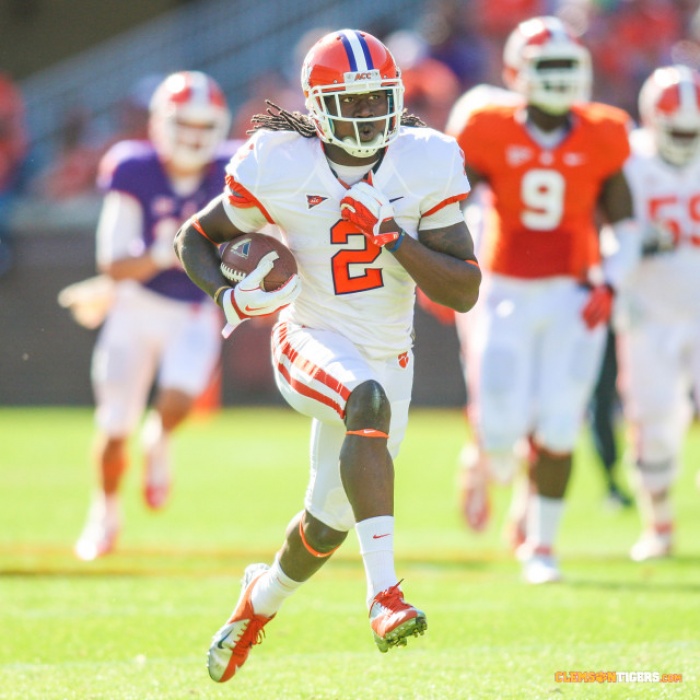 Note: The following appears in the March issue of Orange: The Experience. For full access to all of the publication's content, join IPTAY today by calling 864-656-2115.

There is just something about spring football. Yeah, I know we don’t get to see our team go against someone else, although I believe the days of a live scrimmage against another team is not far off, but seeing our Tigers on the practice field does a body good.

With that in mind, I thought I would go back and celebrate some of the great Spring Game performances in Clemson football lore. Where else would I go to find out the information I needed for this article than to “Clemson Google” himself, Tim Bourret?

When I walked into his office to let him know what I was looking for, a laugh came from behind his desk. He, just like all of you, knew there have been some legends born during Clemson Spring Games in Death Valley, and he had the records to prove it.

In recent years, all one has to do is mention the name Paul Macko, and a Spring Game hero comes to mind. Macko was a three-year lettermen in 2006, 2007 and 2008, but it was his Spring Game efforts that brought him his biggest fame. Macko’s teammate, Rendrick Taylor, had four receptions in 2006 for a Spring Game best 174 yards and a touchdown. The touchdown covered 97 yards and stands as the longest touchdown catch in Tiger Spring Game history.

Some players have used the spring to make their mark and then go on to have big seasons. Just a year ago, linebacker J.D. Davis led the team in tackles (9). Little did we know it would foreshadow what he would do in 2017, as he would go on to play 332 snaps in 14 games, starting five of those contests and registering 55 tackles.

In the mid 1990s, Antwuan Wyatt became the first Tiger to have Spring Games with 100 rushing yards and 100 receiving yards. In the 1994 game, Wyatt ran the ball for 107 yards on 14 carries and scored two touchdowns. Then in 1995, he moved to wide receiver and had six receptions for 110 yards and two touchdowns.

In the 1981 Spring Game, Perry Tuttle set up what would be a great senior campaign by totaling four receptions for 144 yards. He would be on the cover of Sports Illustrated by season's end.

DeAndre Hopkins' last Spring Game was in April 2012. He had seven catches for 120 yards and a touchdown. His final game that year was the famous “fourth and 16” win over Louisiana State in the Chick-fil-A Bowl.

In 2013, Sammy Watkins set up his final regular season in a Clemson uniform with a Spring Game performance of seven catches for 156 yards and two touchdowns. The year ended with Watkins being named MVP of the 2014 Orange Bowl. The other offensive hero of that 40-35 victory over Ohio State, Tajh Boyd, also used the 2013 Spring Game to set the tone for the upcoming year. Boyd was 20-26 passing for 229 yards and two touchdowns.

Who will make his mark in this year’s Spring Game on April 14 is anyone’s guess. All I know is that football is back, with 14 practices and an intrasquad game to be had, and I can’t wait to get my fill of some Tiger pigskin.