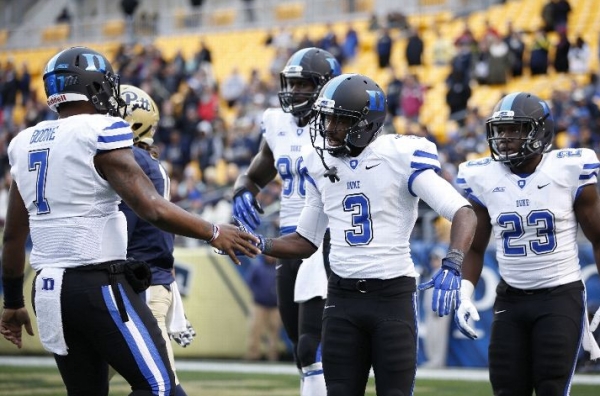 Duke Football Getting It Done.

Duke Football is For Real!

Duke is getting used to thriving under pressure.

Give the nation's 24th-ranked team a tight game and they're more than happy to let you make the mistakes while they go about their business.

The Blue Devils remain at the top of the chaotic Coastal Division.

Backup quarterback Thomas Sirk bulled into the end zone from 5 yards in the second overtime to lift Duke to a 51-48 victory over the Panthers on Saturday.

The Blue Devils (7-1, 3-1 ACC) held Pitt to a field goal to start the second overtime then went 25 yards in four plays, with Sirk's second touchdown of the day ending it.

Anthony Boone passed for 266 yards and three scores and added 47 yards rushing and a touchdown on the ground for the Blue Devils. Boone is 17-3 as a starter, tying Jerry Barger for the most wins by a quarterback in school history.

"When I'm done playing, I'll have more of a chance to think about that and it will hit me," Boone said "But I'm just trying to help my team get back to (the ACC title game)."

The Blue Devils took a significant step after winning their seventh straight game decided by a touchdown or less.

Jamison Crowder caught nine passes for 165 yards and two touchdowns to become the second-leading receiver in ACC history. DeVon Edwards added a 99-yard kickoff return for Duke's lone touchdown of the second half.

The Blue Devils are playing big and seem to be getting the type of recruits that will help them maintain and be competitive in the ACC for the forseeable future.

back to top
How to resolve AdBlock issue?
X