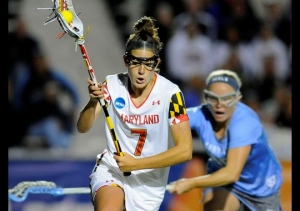 The 13th annual Tewaaraton Award Ceremony was held Thursday, May 30 at the Smithsonian Institution’s Nationally Museum of the American Indian in Washington, D.C.

The Tewaaraton Award, named after the Mohawk word for lacrosse, has been given to the nation’s top men’s and women’s college lacrosse players every year since 2001.

Maryland senior midfielder Katie Schwarzmann became the first women’s lacrosse player to be named a finalist for the award three times and was joined by teammate Alex Aust, a senior attacker.

Another finalist and participant in the NCAA National Championship was North Carolina’s senior midfielder Kara Cannizzaro.

Schwarzmann is also the third woman to win the award twice. The other two both played midfield for Northwestern. Kristen Kjellman won the award in 2006 and 2007 and Hannah Nielsen won the award the following two seasons. You can't ask for much more than four overtime periods of spectacular defense in any game. In this national championship, it was thrilling, gut wrenching, and ultimately heartbreaking for Maryland.

Maryland and North Carolina had already played one thriller this season, a regular season game in College Park that the Terps won 14-13.

Maryland was once again victorious against their conference rival in the ACC championship, a game in which both teams were plagued by turnovers, though Maryland did a better job of taking advantage.

For the Terps, there was a lot on the line. A win would have given them their 11th national title in school history. They also would have finished the season at 23-0, giving the school it’s fifth perfect season and first since 2001. It was also one last chance for senior Tewaaraton finalists Alex Aust and Katie Schwarzmann to earn their second NCAA title.

North Carolina scored the first three goals of the contest and freshman attacker Aly Messinger had a hat trick within the first twelve minutes of play.

Maryland fought back to a 5-4 deficit by dominating the Tar Heels on draw controls, but turnovers allowed North Carolina to take a 9-6 lead into halftime.

It took a few minutes, but Maryland drew first blood in the second half. From there, they went on an offensive tear, scoring five unanswered goals in a period of 7:36. North Carolina answered with three straight goals of their own to take a 12-11 lead with nine minutes remaining.

Alex Aust scored the tying goal with 3:51 left and though Maryland had another late possession, nothing came of it and the fans got some free lacrosse.

The first overtime in lacrosse consists of two 3-minute periods, neither of which is sudden death. That was unimportant, however, as neither team scored and the second overtime began. From then on, it was sudden victory.

Senior goalkeeper Kasey Howard had just one save for Maryland in regulation, but recorded four spectacular saves in overtime. Unfortunately, she was unable to deflect the final shot and freshman midfielder Sammy Jo Tracy became the hero for the Tar Heels, lifting her team to its first national title. 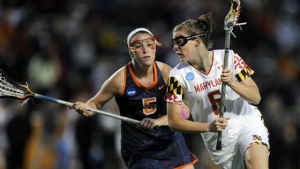 North Carolina grabbed a 4-1, halftime lead against Northwestern on Friday. About three minutes into the second half, they added a goal to their lead. The game was never close and the Tar Heels cruised past the Wildcats with an 11-4 win.

Maryland paid its fans no such favors. The Terps crushed Syracuse in their February meeting. Despite losing their captain, Michelle Tumolo, to an ACL injury since then, the Orange gave the #1 ranked team in the nation quite a scare.

The Terps led for the entire first half. It was close throughout but Maryland scored two goals in the final 35 seconds of the half to grab a seemingly comfortable 7-4 lead at the break.

Syracuse began their second-half attack early, when Amy Cross scored just 17 seconds in. A strong attack paired with shoddy defense by the Terps eventually allowed ‘Cuse to take a 10-9 lead with a little more than 18 minutes left.

After the feverish pace to the first 15 minutes of the second half, at which time the game was tied at 10, defense took over. Maryland struggled to help Kasey Howard defend the goal early in the half, but finally got their positioning straight. Alex Aust proved a strong defensive presence by causing two turnovers.

Brooke Griffin scored the winning goal off an assist by Katie Schwarzmann with less than three minutes left. Maryland escaped the thriller to advance to the school’s 17th NCAA title game and their third in the last four years.

They will face North Carolina, who is appearing in the title game for just the second time in school history.

It will be the third meeting between the two conference rivals this season. Maryland won a close contest in College Park during the regular season, then beat them a little more comfortably in the ACC title game in Chapel Hill a month ago. North Carolina now gets one more crack at the Terps, this time at a neutral site.

The game is slated for an 8:00 p.m. start on Sunday and will be televised on ESPNU – note that it is blacked out nation-wide on ESPN3, so it is only available on ESPNU. 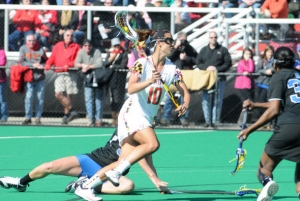 Villanova, PA will host the women’s lacrosse Final Four this weekend, with the semifinals on Friday and the championship Sunday at 8:00 p.m.

Northwestern (19-2) will try to make it nine consecutive national championship appearances when they take on the ACC runners-up North Carolina Tar Heels (16-3) at 5:00 p.m. North Carolina’s first and only title game appearance was in 2009.

Following that game, the Lady Terps (21-0) will face Syracuse (18-3). The Orange appeared in the national championship for the first time in school history last year. Maryland’s last appearance was 2011 and their last title came in 2010.

Maryland is coming off a 14-9 victory over Duke on Saturday, their second victory against their conference rival this season. Senior Tewaaraton finalist Alex Aust had a stellar game in the victory, helping the Terps to their fifth consecutive national semifinals. She led the team in goals with five, in assists with two, and in ground balls with four.

The Terps visited Syracuse in February and defeated the Orange 19-11. So far this season, the two teams play a fairly similar style. Both teams score roughly 15 goals per game and give up around 8 goals per game.

Syracuse is slightly more aggressive, taking a few more shots per game. But Maryland has a higher SOG (shots on goal) percentage on offense and gives up a lower percentage on defense than the Orange.

Game time is 7:30 p.m. on Saturday and you can watch for free on ESPN3. The earlier game will also be available. 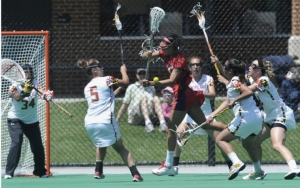 The Lady Terps played terrific offense, and even better defense, on the way to steamrolling the Stony Brook Seawolves and earning their 20th consecutive victory to start the season.

Redshirt Sophomore Brooke Griffin was the star on offense, scoring 4 of Maryland’s 11 goals. The Lady Terps’ Tewaaraton finalists pitched in on offense as well, with Alex Aust scoring two goals and assisting on two more, and Katie Schwarzmann adding a goal and an assist of her own.

Duke will visit Maryland’s Field Hockey & Lacrosse Complex for the second time this season when the two teams meet in the NCAA Tournament quarterfinals Saturday at noon. Maryland won the first match, 15-6 back in February.

After losing four games in the regular season, including a three-game losing streak from March 28 through April 12, and losing to Virginia in the ACC Tournament quarterfinals, Duke had to play in the first round of the NCAA Tournament while Maryland enjoyed a bye to the second round. It took two overtimes for them to get past Princeton, but they enjoyed an easier victory against Navy in the second round.

Duke was once a powerhouse in women’s lacrosse, but Maryland and North Carolina have taken over the ACC in recent years. Still, they are a competitive bunch and will not make it easy for Maryland to advance to the semifinals in Villanova, PA next Friday, where the winner will face either Florida or Syracuse.

On the topic of North Carolina, they also face an ACC rival, Virginia, in their quarterfinal of the NCAA Tournament. The winner of their match will face Penn State or Northwester, who has won the last two national titles and seven of the last eight.

Lady Terps Look to add to their Conference Title 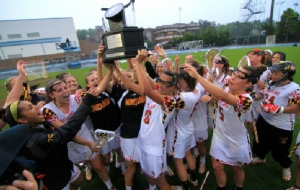 Maryland’s undefeated run continues to grow, but the team looks as focused as ever. The women’s lacrosse team captured its fifth consecutive ACC Tournament title two weeks ago in Chapel Hill. They beat Virginia 13-9 in the semifinal before defeating UNC in their home stadium by a score of 12-8, a much more comfortable margin than their 14-13 home victory over the Tar Heels just a few weeks earlier.

After a weekend of rest, the Lady Terps figure to be fresh for the NCAA Tournament. They have advanced to the semifinals each of the past four years, but have not won the National title since 2010. A title this season would be the school’s 11th. Northwestern has the second most in NCAA history, with all seven of their titles coming in the last eight years.

Maryland has no shortage of star power, but they have been led well all season by seniors Alex Aust and Katie Schwarzmann, both of whom were named finalists for the 2013 Tewaaraton Award yesterday. Schwarzmann won the award, given annually to the best men’s and women’s lacrosse players in the nation, in 2012 and is the first Terp to be named a finalist for the award three times. The winner will be announced on May 30.

With preparations nearly complete for, hopefully, a deep tournament run, the only thing left is for Maryland’s first opponent to be determined. Stony Brook and Towson play in College Park tonight at 7 p.m., with the winner to stick around for a noon matchup with the Terps on Sunday.

UPDATE: Stony Brook beat Towson on Friday, 8-6, earning the 17-2 Seawolves a meeting with 19-0 Maryland, the top seed in the tournament. A stadium record crowd of over 2300 fans was on hand to watch Maryland host North Carolina in a battle of the nation’s top ranked teams.

After the Tar Heels knocked our men’s and women’s basketball squads out of their ACC Tournaments, it was nice to see some success against the Carolina Blue.

One of the country’s best rivalries, the game certainly lived up to its hype. The Heels scored a lot of their goals on long possessions, while the Terps tended to strike quickly. There was never a dull moment

This time, exiting North Carolina’s time out, freshman midfielder Taylor Cummings won the draw and took the ball all the way to the net by herself, giving Maryland a 3-point lead.

North Carolina made a game of it, but came up a goal short as the Terps improved to 20-10 all-time against their conference rival.

Maryland is now 14-0 on the season, with home games against Princeton and Dartmouth then a road contest at Virginia Tech left before postseason play begins.

UNC’s loss was their first since a 5-3 season-opening loss to Florida.

The Terps clinched the ACC regular season championship with the win and are looking for their 5th consecutive ACC tournament title. They beat North Carolina for each of the past three.