Wolfpack's Ralston Turner dropped a career-high 23 points -- 19 in the second half to lift the NC State men's basketball team to a 65-56 win over the Maryland Terrapins on Monday night at PNC Arena. The Wolfpack improves to 12-7 overall (2-4 ACC), while Maryland falls to 11-8 (3-3).

ACC Standouts Moving on To The Next Level 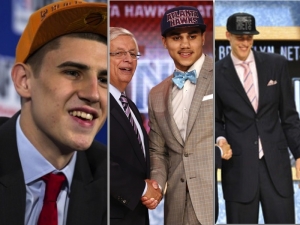 This past Thursday, June 27, 2013, the best young players in the world gathered in Brooklyn, New York at the Barclays Center with hopes of hearing their names called by NBA Commissioner, David Stern. The 2013 NBA Draft was one of the most intriguing drafts in a few years because there was no clear first overall pick, as players draft stocks rose or fell almost daily.  The draft was also considered to be a role players’ draft, making it difficult to choose between players at the same position.  The Cleveland Cavaliers eventually selected Anthony Bennett from UNLV with the first overall pick.  There were also four ACC former standouts that were picked in the first round of the draft, tying them with the Big East and Big Ten.  These four players have tremendous potential and will eventually play important roles on their respective teams.

The Phoenix Suns used their fifth overall pick on Alex Len, the Ukranian big man from the University of Maryland.  Len is a solid big man with a nice touch and his upside combined with his height made this an easy pick for the Suns.  Len is also a very deceptive rim protector, and his defensive awareness is at a very high level for a player that has not been playing basketball for a long time.  Surprisingly Len was selected over Nerlens Noel, who was predicted to be the first overall pick in this draft at one point.  Len will be joining three veteran big men in Phoenix, Luis Scola; Marcin Gortat and Jermaine O’Neal, who will provide him with positive advice and guidance on how to be a good big man in the NBA.  Although he will be joining these seasoned veterans, Len will be asked to play from day one in Phoenix and he will be a solid addition to a young and upcoming roster in Phoenix.

The Dallas Mavericks made a great steal in the draft after they slid down the draft twice.  They selected standout sophomore point guard, Shane Larkin, from the ACC Champion Miami Hurricanes.  Larkin was one of the most explosive guards in the nation this year after a rather quiet freshman year.  Any opportunity I was afforded to watch Miami play I was glued to the TV because watching Larkin play was actually fun.  While Larkin is undersized at 5-11, he makes up for it with his basketball I.Q. and athleticism; Larkin is also very skilled, he uses his quickness to get in the paint, he puts pressure on the defense and he finishes well.  When teams do not have guards as quick as him they will have to give him a little space and Larkin is a very good outside shooter as well as off the dribble shooter.  Larkin could step into an important role as a back-up point guard for the Mavs this year, as Mavericks’ coach, Rick Carlisle, said; “He could compete for playing time right away.”  The Mavs are currently pursuing Rajon Rondo, who would be the perfect mentor for Larkin, but if that deal is not done Larkin could see himself competing with Darren Collison, Mike James, and Rodrigue Beaubois for playing time and a potential starting spot.

The Brooklyn Nets with the 22nd overall pick selected Mason Plumlee, former Duke standout.  While Plumlee slipped a little lower on the draft board than projected, he will be a perfect fit in Brooklyn as they have continued to prepare their roster for a championship run.  Plumlee would back-up Brook Lopez, but he is a very different player from Lopez and he will be a great compliment for him coming off the bench.  Plumlee’s length and athleticism is already on the NBA level and he will be a very valuable role player for the Nets as a result.  The Nets just worked out a deal with the Boston Celtics to acquire three veteran players, Kevin Garnett; Paul Pierce and Jason Terry, who have all won NBA Championships and at one point in their careers were the best or one of the better players on their teams.  The Garnett addition will make the job of preparing Plumlee easy for the Nets’ first year coach, Jason Kidd.  Garnett and Plumlee have similar builds, and although Plumlee is nowhere near Garnett’s skill level, competing against him and Lopez everyday will prepare Plumlee to be on the floor immediately.  Another thing Garnett will teach Plumlee is how to play power forward and center. Garnett has played both positions in the NBA and it is possible that Plumlee could also be asked to play both positions for the Nets.

The last player from the ACC that was selected in the first Round was Reggie Bullock, former UNC shooting guard.  The Los Angeles Clippers selected him with the 25th overall pick.  Bullock was never a star in college, but he can be a solid addition to a team as a prospect that will be ready to play in the NBA eventually.  Bullock is a solid shooter and a decent defender, but he struggles to score off the dribble and that makes him very one-dimensional.  He does not have much upside but if he continues to improve his jump shot he could find his niche in the NBA.

There were three other ACC players that were selected in the second round.  ACC player of the year, Erick Green, was the first pick of the second round.  Fellow ACC counterparts, Duke’s Ryan Kelly and NC State’s Lorenzo Brown, later followed him.  Unfortunately Duke former standout Seth Curry, brother of NBA star, Stephen Curry, went undrafted and will have to take the undrafted free agent route.  He as well as the other three players who were selected in the second round could all find niches in the NBA and contribute when needed. 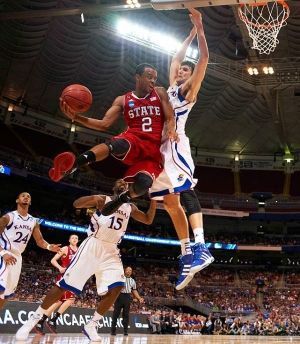 NC State Wolfpack guard Lorenzo Brown is a solid NBA prospect. Standing 6'4" he's a good size for a point guard. He could use some time in the weight room but that will come. It's amazing when the knock you have on a kid is he's 22 will he be able to gain a little more strength and toughness -- that's laughable of course he will adjust to the NBA game and be better suited than a one and done player that you are waiting to mature.

To sum it up this Lorenzo can play at the next level.