Canes Blow Out The Hokies The Virginia Tech Hokies lost to Maryland 27-24 after the Terrapins quarterback, C.J. Brown score on a 3-yard touchdown run in OT.

This marks the first time the Hokies have lost when Thomas did not throw an interception. The Hokies were 15-0 prior to this game.

The Hokies jumped out to a 7-0 lead early in the game when a 76-yard drive ended with a 3-yard touchdown run by Trey Edmunds.

Virginia Tech continued to struggle with their special teams giving up a punt return for a touchdown and missing a field goal.

Eric Kristensen, the freshman walk-on who filled in for dismissed kicker Cody Journell had a chance to add to the lead in the first quarter but pulled it left.

Tech rallied from a 14-point deficit to force overtime.

The Hokies lost the coin toss and Maryland elected to play defense, so the Hokies took over on the Maryland 25.

The Hokies got to the Maryland 6 but Thomas was later sacked for a 7-yard loss – one of seven sacks on the day by the Terrapins – and the Hokies settled for a 31-yard field goal by Kristensen.

The Hokies lost their final home game of the season for the first time since 2003.

The Hokies are now 7-4 overall and 4-3 in the ACC. The Hokies however do remain alive for the ACC’s Coastal Division crown but will need help.

Tech will close the regular season and look for a win against in-state rival Virginia on November 30. Virginia Tech Get 17-10 Win in Atlanta

Hokies QB Logan Thomas played a complete game running and passing for touchdowns in the first half.

The Hokies defense helped finish off the Wrambling Wreck of Georgia Tech by holding them to 10 points. 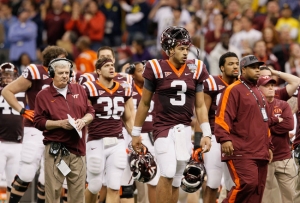 Logan Thomas was supposed to be the Hokies Top Prospect this spring for the NFL draft, but a down year resulted in him returning to the Hokies for his senior season. Taking Thomas’s spot as the top prospect from Virginia Tech this year is wide receiver Corey Fuller who is projected to go in the top five rounds and is ranked the 21st best receiver in the draft.

Another draft hopeful Marcus Davis is also a wide receiver from Tech projected to be drafted in the 6th round.

Vinston Painter, offensive tackle, has flashed his skills in the NFL combine and has come out of nowhere to now be drafted as high as in the third round according to cbssports.com.

Draft hopeful offensive tackle Nick Becton, is hoping he will hear his name called this upcoming weekend in the later rounds of the draft. It has become clear that if he doesn’t get drafted he will be picked up through free agency.

Whether or not these players get drafted, they will be picked up through free agency and they will compete for a roster spot in 2013. Spring football games are supposed to bring hope, progress and excitement for the upcoming season. Well, this one for Virginia Tech did not do that for me. I know I have been spoiled by past Hokie football teams, but doesn’t mean I can’t be overly critical of the “start” to the 2014-2014 season.

There are three aspects of the game for the Hokies I was hoping to see signs of progression from the offense, especially Logan Thomas, offensive line and running game. It has been well documented in the Virginia Tech football program that as a fan you must hate the offense, because we are a solid offensive coordinator away from a national championship. There has been much discussion about the change in offense coming this season, but judging by today’s game, it looked very similar. There is hope though, as spring games aren’t the forums for coaches to throw the kitchen sink for fans.

I was hopeful that Logan Thomas would put last year behind him, but he picked up where he left off last year. He threw 3 INTs total, and two were in consecutive possessions, including one in the red zone. On the plus side for Thomas, INTs aside, was much more accurate and confident in his passing than he showed last season. If he limits the errant throws, which lead to INTs, I see him having a fine season.

It was understandable last year to see a dip in rushing production, with the loss of the elusive David Wilson to the NFL. But, with one year under Coleman and Holmes, I was hoping to see more from both of them. And, they weren’t getting much help from their young offensive lineman who, like their offensive compatriots, struggled to find their mark last season and are looking to improve this season. I am only critical because without their success, the Hokies will struggle to make another bowl game appearance, I believe.

I don’t want to seem like I am completely giving up on this season, because I’m not, and there were certainly bright spots for our Hokies. It seems that Thomas has found a favorite target in sophomore Joshua Stanford, and Stanford looks up to the task making several catches this afternoon. This element of Virginia Tech’s game is still to be determined, but the defense looked outstanding today scoring all 16 of the first half points. What is still to be determined is both offenses looked sub par, and even a Division IAA defense would look dominate against us.

All in all, there is a lot of room for improvement for the Hokies this season in order to be successful. It is extremely early and hard to be so nitpicky of on game, on beautiful day in the spring before the season. “Enter Sandman,” you are right around the corner, go Hokies!