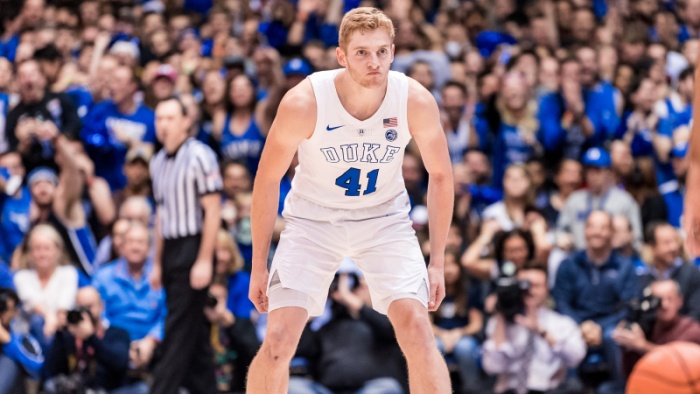 DS: So let’s just start with how a kid from Australia ends up playing college basketball in Durham, N.C.?

JW: I started playing basketball at an early age, and at the time I knew the league in Australia wasn’t great and I knew I wanted to pursue it very seriously and make a career out of it. From the age of 12-13, that’s when I decided I wanted to go to college in the U.S., you know, to take that pathway to play in the NBA and doing a lot of things with basketball. I was also pretty competitive in the classroom as well and saw an opportunity to get a college scholarship as a big opportunity to both play basketball and get an education. I was fortunate enough to play for some state teams and play for Australia in some world champs, and was fortunate to get a scholarship to the Australian Institute of Sports.

I was just very fortunate in the path I took to get recognition, but in terms of Duke it was all a bit random to be honest. I had already done a few visits and then at the end of 2015 I kind of put off my college stuff for about a month or two because I was on a professional team in Australia finishing off a season with them. So I wanted to re-visit my college recruitment, after I was done with that commitment, and during that time Coach (Jon) Scheyer got in touch with my dad. My dad messaged me about it and I couldn’t believe it. I thought he was joking at first because of how random and out of the blue it was, but the next day I found myself on the phone with Coach. I can’t explain how nervous I was. Obviously, I knew a lot about Duke — Coach K, the program, and the success, as well as the educational aspect of Duke. I decided to come on a visit and loved it, loved the environment, loved the staff. After that, once I saw everything in person, it was a pretty easy decision to come here.

DS: Before you got called up to that professional team, it is fair to say that you were pretty close to committing to another school?

JW: Yeah, either Boise (State) or Hawaii, I wasn’t really sure. I was tossing it around between the two. They both had had successful Australian players in the past, so that was a bit attractive to me. So yeah, I was still sorting between those two and actually the league in Australia was getting a lot better at that time too, which made me think harder about playing in Australia and staying closer to family and friends. But yeah during that time, in January of 2016, my head was all over the place. It was a stressful time.

DS: There are obviously challenges in living halfway across the world from your family — you have a twin brother (Ben), a sister (Emma), plus your mom (Rachel) and dad (Jeff). Any unusual ways you guys stay in touch. I would imagine the time difference doesn’t make that easy.

JW: It’s mainly just FaceTime and text. Sometimes I’ll text them random hours of the night their time and you know you just won’t hear back for a few hours, but I’m pretty sure my mom leaves her phone on just in case I call no matter what time it is. But I try not to bother them too much.

DS: This is your junior season and I think a lot of people said when you decided to come to Duke that you decided to forego potentially more playing time at another school. But it feels like you’ve dismissed that preconceived notion this season, averaging better than 20 minutes per game. Is that something you expected or have you even surprised yourself?

JW: In a way, yes. I mean, I always knew it was going to be a challenge. That was one of the things that drew me here. I felt like if I was going to pursue this career in basketball it’s not always going to be easy, not always going to be a walk in the park. To be able to come here and play against the best players around America — I’ve guarded Jay(son Tatum), G (Grayson Allen), Luke (Kennard), the guys this year obviously — I’m going up against great players every day. I knew that I would really challenge myself, make myself better as well as academically really pushing myself in that area.

I knew it was going to be a challenge and this summer I really had great attention to detail, with my diet and workout plan, just really trying to become better, because I knew we had a lot of good players coming in with our freshman class, and a lot of good guys coming back. I felt like the first two years I learned a lot and I felt like this was really my time to step up, especially in a leadership sense because I knew the standards of the program and everything like that. Fortunately I think it worked out, but I’m still trying to get better as the season moves along.

DS: Everyone talks about the speed of the game and how it’s hard to replicate that outside of the game. Your first two years, how did you go about improving your individual game when you weren’t getting as many minutes as you are now?

JW: I mean, you just use practice to get better. For me coming from Australia, I was always the most athletic guy on the floor pretty much with a doubt there. Coming here I was just kind of average I guess. However you want to look at it, just the athletes we have here, especially in our program, especially my freshman year. We had Jayson, Harry (Giles), Marques (Bolden), Javin (DeLaurier), G — I mean the list goes on. The speed of the game really picked up, and for me that was the biggest adjustment to make coming over here.

I feel like I’ve really taken that in stride now, and now it feels like the game I’m used to. It took a little bit of time but Coach really helped me come along. And as a young kid from another country, I feel like I had a lot of support from the guys as well, and felt really embraced as a player and a person, which made me feel really comfortable here.

DS: So you go through the summer and you feel good about where your game is at and one day in the run up to the start of the season Coach asks you and Javin to stay after practice. If memory serves, it wasn’t the best practice — did you feel like you might be in trouble or did you think there might be something good coming as that was the day you found out you were being named a captain.

JW: I definitely didn’t think he was going to name us captains. As you said, it wasn’t one of our best practices and I feel like at that point Javin and I had established ourselves more as leaders on the team but obviously not formally as captains or anything. Just more due to our personality types and the fact that we were really close and helped each other in terms of really trying to bring the team together. From past years we knew how important that would be in terms of overall team chemistry and you translate that out onto the court. Obviously we had the Canada tour and I wanted the guys to really enjoy that. It’s a once every four or five years thing, and for the group we had we saw it could really help us come together and be really tight and just have a lot of fun with each other.

But I definitely didn’t expect him that day to name us both as captains. We took it with great pride, it’s a great opportunity. I feel like I can speak for Javin and myself — as a kid from Victoria, Australia and Javin from Shipman, Virginia — we’re just two guys who felt like we aren’t supposed to be at a place like this. But it’s been a great opportunity. I couldn’t be happier with the role and the chance to lead the boys.

DS: You’re getting to the portion of the season where they start handing out trophies, whether that’s for a regular season title, ACC Tournament title or an NCAA championship. That’s something the younger guys haven’t experienced before, that blitz that is March. What do they need to be ready for?

JW: To fight, to compete, every game. We can’t take games off. But to be honest, I’m not really worried about that with these young guys. These guys are a lot more mature than their age or their class suggests. These guys are winners and they want to win, and that’s all they really care about. So it makes it a lot of fun to go out there with them and we’re all on the same page and want to see each other do well, compete and win.

Especially here in the regular season, we want to show we can be good consistently over a period of time and it’s something that a Duke team hasn’t done since I believe since 2010. As far as the ACC Tournament goes, we’ve been lucky enough to win it, Javin and I — it’s a great feeling. And then of course the NCAA Tournament, we really feel like we have a team that can go all the way, especially with our focus, our determination, just our willingness to win and overcome any type of adversity that comes our way. There’s still a lot of basketball left to be played and I think the guys are as excited as they were at the start of the year to keep going forward and try to keep doing our thing.

More in this category: « Big Game From Allen -- But Not Enough Epic Comeback »
back to top
How to resolve AdBlock issue?
X