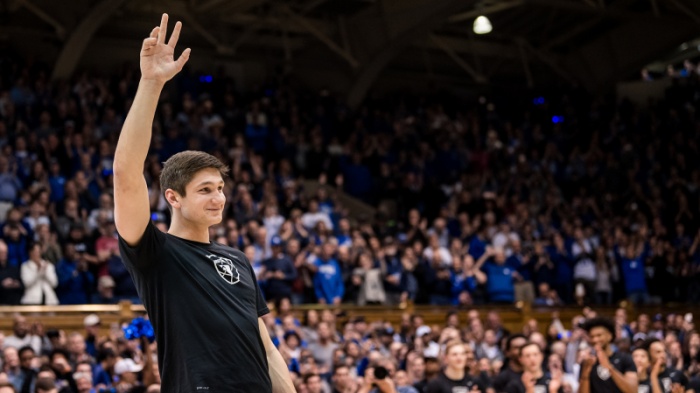 Several Blue Devils were involved in NBA All-Star Weekend, from Jayson Tatum and Marvin Bagley III playing in the Rising Stars Challenge game to Seth Curry participating in the three-point contest, Tatum in the skills competition and Kyrie Irving in the All-Star Game itself (his sixth appearance in seven years).

Several other professional Blue Devils used the open date in the schedule to visit their alma mater for the Duke vs. N.C. State game in Cameron Indoor Stadium, among them last year’s senior leader Grayson Allen, a first-round draft pick by the Utah Jazz. Allen has spent time in the G League (seven games, 30 minutes per, 15.7 points) as well as in a reserve role for Jazz coach Quin Snyder (28 games, 10 minutes per, 4.1 points) during his rookie season.

After watching the Duke-State game, Allen had to leave town and get back to work before the Duke-UNC game, but he had a minute to share a few thoughts from the bleachers at a Blue Devil practice session.

Your impressions from watching this group of Blue Devils live…

They are a very fun group to watch. I’ve watched them throughout the year on TV but watching them live you can really see how they use their athleticism and size. For them it’s really dangerous when they get some stops on defense or get rebounds and get out and run, because when they are in fastbreak they have so many athletes, so many weapons. Get a quick three, or obviously there are a ton of lobs that can happen. So it’s a very dangerous group to score in transition.

You see a lot that would translate to the next level?

Definitely. The size and athleticism, they are all skilled and they are complete basketball players. Zion (Williamson), Cam (Reddish), R.J. Barrett, they make highlights for different reasons but they have all-around games and that’s really going to translate because they can do so many different things on the floor.

Even though you can’t stay for the Carolina game, what do you remember most about playing in that series the past four years?

Every game is amazing. There’s a different level of hype and excitement surrounding the games because of the fans, the rivalry between the schools, the media coverage of the game, really everything adds an extra level to the game because of the rivalry. It’s the best atmosphere I’ve played basketball in so far. Every year was the best, and every year topped the last year. My senior year I just took in every moment, from the pregame to (ESPN) GameDay being there, just everything about the game. It’s a fun game to play in. When you go on a little run or get a few stops and the crowd gets going and this place starts shaking, there’s nothing like that.

Is that atmosphere something you miss at the pro level?

Definitely. There’s nothing like playing in Cameron. You can’t replicate that in a giant arena with 20,000 people. There’s just nothing like it. So loud…it’s an amazing place to play. I definitely miss that. I wish I could get another game in here.

Although in Utah you are at another place where the crowd is always with you. Share with us some of the things you’ve learned in your transition to the next level.

But the NBA season is an extra grind from college with extended road trips, playing a bunch of back-to-backs. There’s an extra grind so there’s an extra level of commitment you have to make on and off the court. With the game itself, it’s faster. Guys at every single position are usually more skilled and more athletic, so there’s an extra element of speed. You have to have your instincts right because if you leave one guy open for a second he’s draining a shot, and it doesn’t have to be the superstar on the court. The college game is much more compact. The NBA game is open space and fast, which makes it exciting, makes it fun but also makes it a little tougher to defend.

And how about realizing the dream of being an NBA player…

It’s amazing. It was surreal draft night getting selected and it didn’t fully set in until I had my first game with the Jazz, had that uniform on and played an NBA game and was playing against NBA guys I had watched on TV the year before and years before. So it’s just slowly setting in this year. I dreamed about it since I was a kid, since I really started getting into basketball, and it’s really cool for me that I’ve been able to take that next step — fulfilling my dream of playing at Duke and fulfilling my dream of getting drafted into the NBA.