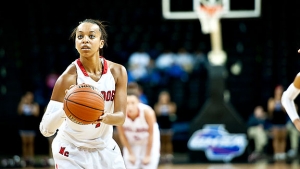 The Terps would love to count their 110-34 victory over the Catholic Cardinals toward their final record. The team opened the game with a 30-0 run, then opened the second half with a nearly-as-impressive 19-0 run.

Catholic managed just 10 points in the first half as Maryland used a lot of full-court press during the early stages of the exhibition. Quick hands helped Maryland force a lot of turnovers throughout the game. The only complaint for the Terps is that they did get a little sloppy with the ball once the game was in hand. Still, they scored consistently throughout, 54 points in the first half and 56 in the second.

Jones, a local player, was named All-Met Player of the Year by the Baltimore Sun during her junior year at Aberdeen High School. She averaged a double-double that season. Despite tearing her right ACL during her senior year, she was still named the No. 55 overall recruit by ESPN in their HoopGurlz rankings.

Freshman forward A’Lexus Harrison got plenty of playing time in the second half against Catholic. Harrison started all four years at Digital Harbor High School in Baltimore. She received All-Met recognition from the Baltimore Sun for three years, making their second team as a sophomore and first team in her final two seasons.

Guard Lexie Brown, the fourth and final freshman on this year’s squad, didn’t even seriously consider any other schools before committing to Maryland. She attended North Gwinnett High School roughly 30 miles northeast of Atlanta, GA. The No. 3 point guard and No. 15 overall recruit as ranked by ESPN, Brown was a McDonald’s All-American her senior year and will be a big part of the team’s future as two out of five seniors on the squad are guards.

The Lady Terps will play another exhibition on Saturday, November 2 against Holy Family at 2:00 p.m. at Comcast. Their regular season will open on the road at South Florida on Friday, November 8.