No. 1 Huskies Too Strong for Lady Terps 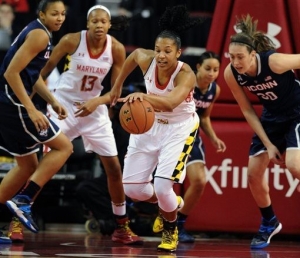 In women’s college basketball, there are three tiers. There is a bottom tier, where just about all of the non-ranked teams are lumped. The middle tier features the ranked teams and those that receive votes. And then there is the top tier, UCONN.

The scary thing is that this Huskies squad is missing two of its best players due to injury. By the time they get to their conference schedule, they’ll be unstoppable until at least tournament time.

The Huskies used just seven players on Friday. Brianna Banks added nine points off the bench, seven of which came in the second half after twisting her ankle shortly before halftime.

The Terps kept the game close in the first half, leading a handful of times and trailing just 43-38 at the half.

UCONN struggled to make baskets in the second half, but Maryland committed nine turnovers which helps explain how they only scored 17 points in the half.

Alyssa Thomas shouldered most of the load for Maryland and only Katie Rutan had a better shooting percentage on the team. Malina Howard helped keep the game close in the first half.

Lexie Brown and Shatori Walker-Kimbrough were the only freshmen to get playing time. Brown had a pretty good game, but the spotlight seemed to give SWK some jitters.

Four of UCONN’s starting five scored double figures, but Breanna Stewart led the team in scoring by quite a bit. Stewart just didn’t seem to miss in the first half, where she scored 19 of her 26 points.

The loss stings, but UCONN is, again, in a class all by themselves. When your options on ESPN’s Streak for the Cash are “UCONN wins by 20+” or “Any other result,” you get an idea of just how good the Huskies are. What stings most is how close to that 20-point spread UCONN came.

Maryland did get some good news earlier in the day. Head coach Brenda Frese signed a multi-year contract extension through 2021, with reports saying that she could also earn four additional years that would extend her tenure through 2025. It is a great move by an athletic department that is under a lot of scrutiny. At least they seem to be able to keep their basketball fans happy.