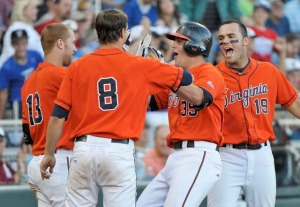 As the top national seed remaining, it would be hard to argue UVA not being the favorite to win the 2014 College World Series. This weekend the Hokies hosted another top five ranked opponent in Blacksburg. Tech defeat UVA 2 of the 3 games played.

The Hokies lost the home opener on Friday night.

Due to inclement weather coming into the New River Valley on Sunday the teams played a day-night double header to wrap up the series.

The Hokies swept the doubleheader to go on and win the series against the Wahoos’.

The team was led by the starting pitchers for both games who shut down UVA’s high potent offense. Joe Mantiply improved to 4-0 after tossing seven strong innings, allowing only 3 runs. Clark Labitan later came in for the five-out save.

Devin Burke got the start for the Hokies in the rubber game of the series. Burke pitched 7.1 innings, allowing four runs. Burke improved his record to 7-3 on the season.

Andrew Rash had a perfect day at the dish going 3-3 with a triple, a homerun, and 2 RBIs. Jack Joyce came in for the final inning to shut the door on the Hoos.

The Hokies will next play Boston College in Chestnut Hill. The next two ACC weekends will be critical for the Hokies’ ACC tournament hopes.

UVA DOES NOT "FEAR THE TURTLE" Comcast Center, College Park,  Maryland -- The Virginia Cavaliers take over Gary Williams Court with a 80 - 69 win as the Terps seemed to have their heads in shell.

Joe Harris dropped 22 and led all scorers , followed by freshman Justin Andersen with 17 -- who had committed to Maryland prior to the departure of Gary Williams.

The Cavaliers shot 54% from the floor and 57.9 % from three point range as they take sole possession of third place in the ACC behind Duke and NC State.

Maryland was led by what I would consider a bad lottery pick prediction in Alex Len with 9 points 7 boards. The Terps seemed to have no confidence in their neglected 7-footer as he was the clear mis-match in the Marylands favor guarded most of the game by 6'6" Justin Andersen.

The Cavs will have to find a way to stay motivated as they take on the ACC's worst team in the Virgina Tech Hokies at John Paul Jones Arena on Tuesday at 7PM.